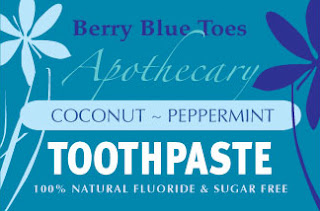 Made with a base of coconut oil. This doesn't taste like traditional toothpaste (it's better:). We don't use sugar  or flouride in our toothpaste. * Please note coconut oil melts at body temperature - so keep it cool. No sunny windows or tucking it in a pant pocket for the day. Will stay solid at room temperature. Good for up to 3 months.


Price: $3.00 travel size OR $6.00 large (temporarily out of large - travel size still available)
Why would you want to avoid Flouride:
Have you ever read your toothpaste label? It probably reads something like this “WARNINGS: Keep out of reach of children under 6 years of age. If you accidentally swallow more than used for brushing, seek PROFESSIONAL HELP or contact a POISON CONTROL center immediately.” (taken from Crest Sodium Flouride Anticavity Toothpaste). If you look in to it a "brushing amount" is the size of a pea.
Fluoride is a pollutant - a by-product of copper, iron and aluminum manufacturing. The problem of how to legally dispose of fluoride was solved in the 1930’s when a study (funded by one of the country’s largest aluminum companies) concluded that fluoride prevented tooth decay. The FDA lists fluoride as an “unapproved new drug” and the EPA lists fluoride as a “contaminant”.  Fluoride has never received “FDA Approval” and is considered to be a toxic waste product from the fertilizer industry. In 1990 forty US dentist brought a case against the American Dental Association contending that the Association purposefully shielded the public from data that links fluoride to genetic defects, cancer and other health problems (Columbus Dispatch, Oct 21, 1990). Since 1990 over 45 US cities have rejected fluoridation. Ninety eight percent of Europe’s drinking water is now fluoride free.  A CANADIAN GOVERNMENT REPORT FOUND FLUORIDATION DOES MORE HARM THAN GOOD.  SILICOFLUORIDES ARE LINKED WITH CHILDREN’S INCREASED LEAD ABSORPTION
The following are common ingredients found in toothpaste: hydrated silica, sorbitol, sodium saccharin, titanium dioxide, glycerin, sodium lauryl/laureth sulfate, and sodium fluoride. Hydrated silica is made from a crystallized compound found in quartz, sand, and flint and is primarily used as an abrasive in toothpaste.
Although there are proponents that warn against the use of all of the above ingredients, sodium fluoride is the one ingredient that triggered the FDA to require warning labels on toothpaste.
HOW TO AVOID FLUORIDE
Take advantage of it  and only buy locally grown and raised produce and meat that hasn’t been contaminated with Fluoride
THE YUKON’S WATER HAS NO FLOURIDE ADDED
Our Stuff:
Posted by Berry Blue Toes at 4:54 PM

Get Social With Us!

We are a small Yukon based company dedicated to promoting and producing pure, healthy bath and body products. All all our products are as natural and pure as possible. No artificial fragrance, colour, or preservatives are used. Most products include Yukon sourced botanicals. Most ingredients are organic. Absolutely no animal testing (unless you count friends & coworkers:). All products are vegetarian. Some products are vegan (no beeswax) ~ just ask. 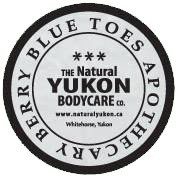